The following article is from a marucci blog post on maruccisports.com

CAT8 VS. CAT7: WHAT'S THE DIFFERENCE?

We believe a new bat should be a new bat, not last year’s model with this year’s paint job.

That commitment to innovation is why we spent two years researching, innovating and implementing the latest technology and strongest materials into the 2019 CAT8 alloy, hybrid and composite bat lines.

So, what’s different about the CAT8 compared to the CAT7?

The barrels of the CAT8 and CAT8 Connect are constructed using AZ105 alloy, Marucci’s newest and strongest aluminum. This new alloy is an upgrade to the AZ4X which was used on the CAT7, Posey28 Pro Metal and the Hex Alloy 2. 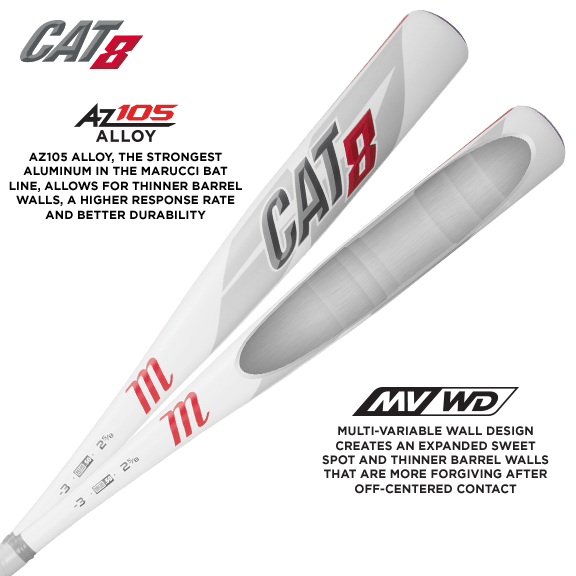 Because the AZ105 aluminum is a stronger aluminum, we were able to engineer higher performance at the sweet spot and also thinner walls near the taper and the end cap. Thinner walls in these off-centered areas created more forgiveness and higher performance with the same durability as the previous AZ4X alloy.

Again, the stronger AZ105 aluminum allowed our engineers to expand the diameter of those Senior League barrels without compromising any performance or durability. 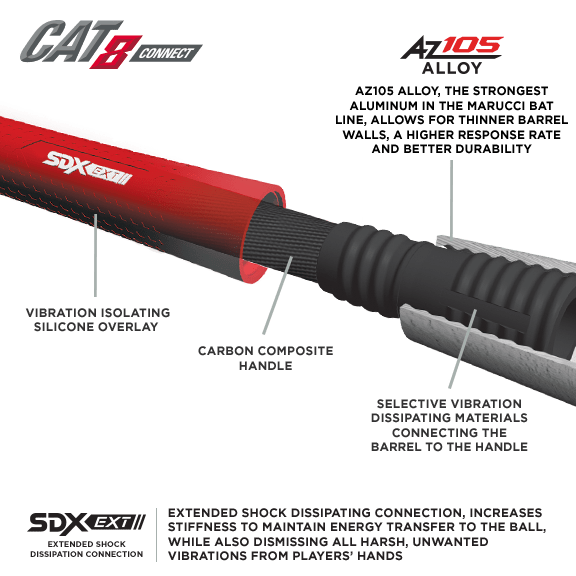 Compared to the original SDX found on the CAT7 Connect, the SDX EXT creates a stiffer connection, which allows for more energy transfer from the player to the ball, resulting in greater performance.

Additionally, the SDX EXT features a triple shock dissipating design that incorporates three levels of shock absorbing and dissipating elements compared to only one level found in the original SDX and CAT7 Connect.

As with all new bat designs, Marucci is committed to innovating and maximizing every facet of the bat to perform at the highest level possible within certification standards. Basically, if it can be improved, we’ll make sure it is improved.

Though the alloy has been upgraded and SDX technology advanced, there were several elements of the CAT7, and all Marucci metal bats, that were kept on the CAT8.

Like all Marucci aluminum, hybrid and composite bats, the CAT8 is engineered with a ring-free barrel design with no internal governors or rings and no dead spots anywhere on the barrel.

Both the CAT8 and CAT8 Connect match their CAT7 predecessors in terms of construction and balance point.

Like the CAT7, the CAT8 is a one-piece alloy bat featuring a precision-balanced barrel and lower M.O.I, resulting in a perfectly balanced feel for precision and control.

The CAT8 Connect, a two-piece hybrid bat has a power-loaded alloy barrel and carbon composite handle. The M.O.I is higher on the CAT8 Connect than the CAT8 one-piece, producing an end-loaded feel for effortless power.

One of the best features of the CAT7 when it was released in 2016 was the patented 2nd Generation Anti-Vibration knob, or AV2. This knob features an upgraded, finely tuned harmonic dampening system for better feel and less negative vibrational feedback.

The CAT8 also includes the AV2 knob, which in addition to its shock absorbing qualities also makes the bat swing lighter. The knob weighs approximately two ounces which is located beneath the hands, dropping the swing weight of the bat two ounces as well.

Because of the bat’s lower swing weight, players are going to be able to generate faster bat speed and get better performance. It comes into play in BBCOR and also in the youth level where kids are not as strong and developed. They will be able to swing a -10 and it will feel like a -12. 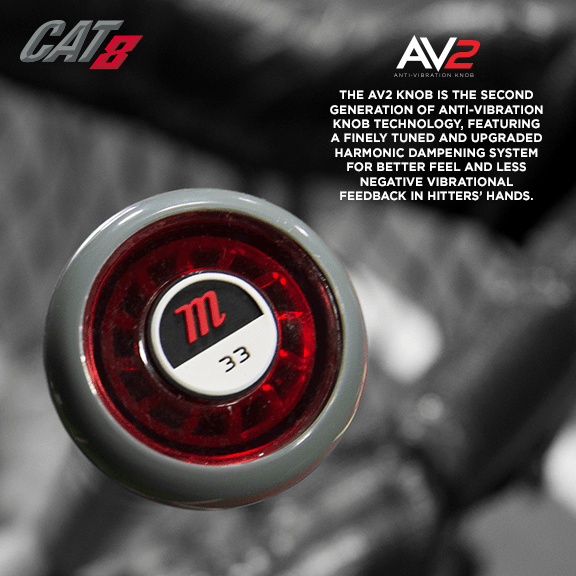 Overall, the CAT8 and CAT8 Connect baseball bats were carefully and meticulously researched over the last two years and designed with feedback from hundreds of players, including Marucci Big League partners Andrew McCutchen and Francisco Lindor.

Both bats feature upgrades from the CAT7 line, while still maintaining certain elements that separate Marucci metal bats from the rest. Rest assured that each part of every bat in the CAT8 line is designed with the latest technology available and is built to perform at the maximum level allowed by certification standards.

Marucci’s commitment to innovation is ongoing, as is its commitment to providing players with the absolute best tools they want and need to be successful.